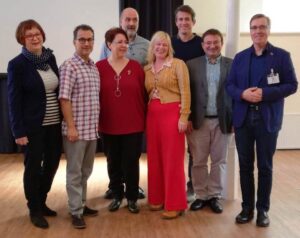 About us –  the International League of Religious Socialists

Our organization (International League of Religious Socialists) was founded 1921 in Switzerland and Germany, and historically the ILRS was first a European organization. But in the 1980s and 1990s, the ILRS expanded its membership and contacts in North and South America, Australia and Africa. At this time, the ILRS represented more than 200,000 socialists and believers from the various socialist, social democratic and workers’ parties in the world.

After 2010 – due to the problems of social- democratic parties and the left as a whole – we have shrunk again and are especially active in Europe. However, in recent years and up to today, organizations of religious socialists have grown stronger in the USA and elsewhere. This gives us hope!

In times of globalization, the worldwide increase of the enormous wealth of a few, the marginalization and precarization of many and the brutal attacks against human rights, religious socialists all over the world are again called up to raise their voices, to protest and to become active. Unlike the neo-liberals, we believe there is an alternative.

Our alternative is an orientation towards the ideals of democratic socialism, towards the rights of workers and minorities, towards human rights. We are in favour of more democracy and more opportunities for the participation of the many. We combine our struggle for a solidary economy with ecology and environmental protection.

As religious socialists we start from the inalienable God-given dignity of each individual human being – we combine this with the struggle for the rights of all human beings and the preservation of God’s creation.

We believe that as religious people we also have a responsibility to fight religious fundamentalism and abuse religion as a political instrument.

ILRS believes that we must fight for tolerance of religious diversity and for social and economic equality throughout the world. We must fight to eradicate poverty and overcome the social, cultural and economic divide that exists in our societies.

We organise international forums on social and economic issues and a conference every three years.

We are connected to the Socialist International (SI), holding an observer status. https://www.socialistinternational.org/

We also are connected to the Progressive Alliance, founded at 2013, after a period of criticism of the membership of parties at SI which are only a support for local dictators. https://progressive-alliance.info/    and   https://progressivepost.eu/

We are connected to the Foundation for European Progressive Studies (FEPS). https://www.feps-europe.eu/

We are involved in the european transnational dialogue with religious and non-confessional organisations (Article 17 TFEU) organized by the European Union / European Parliament. https://ec.europa.eu/newsroom/just/item-detail.cfm?item_id=50189